Maricopa Historical Society Mtgs have started up again. Meetings will be held the first Monday of the month at the new Library in the Redwood room and will start at 5pm.

During the summer months we plan to have local guest speakers tell us about the history of Maricopa as they recall memories and stories of how it all began. Later in October we will be inviting guest speakers from around the area to come and talk on a variety of topics.

Our next meeting Aug 1st We are back with another great guest Edwin Lamoreaux who will be presenting songs and tales of Arizona from long ago.

Just a reminder, we will be meeting on the 1st Tuesday of September because of the holiday on Monday.

June 6th, We had a fun time with Maricopa Trivia as we asked all of you to play along with our very own version of Jepordy, Maricopa style.

May 2nd We enjoyed longtime citizen of Maricopa, Oliver Anderson and his son Kelli speak on the  history, Past, Present and Future of Water in our area.

Mar 7th our guest speaker was Dr Raymond Grant professor of Geology and co-author of the “Mineralogy of Arizona”. He is a past president of Mineralogical Society of Arizona, past chair of the Flagg Mineral Foundation and has recently started the Pinal Geology and Mineral Museum in Coolidge, Arizona. He taught at Mesa Community College in Mesa for 31 years and received his doctoral degree in geology from Harvard University.

Jan 3rd Michael K. Castor, a renowned archeologist and anthropologist was our guest speaker and shared many of the artifacts found during his years of research and excavation.

Dec 6th Denny Hoeh gave a presentation on the Mormon Battalion that marched through Maricopa area 175 years ago.

Nov 1st we had : Heather Moulton and Susan Tatterson – CAC Professors and Author and Illustrator of “Graveyards of the Old West”, which tells a tale of people long buried in Arizona’s dry desert soil. It is a story told in words and pictures.

Friday Member Field Trips: Trips will be scheduled for the fourth Friday, when possible, of the month, October thru April, with no trip in December. We are on break from May to October.

April’s trip We all had a great time visiting the Casa Grande Ruins National Monument and then lunch at the Tag’s Café in Coolidge and for those who wanted to, two more smaller museums in Coolidge. The Veterans Museum and the Pinal Geology and  Mineral museum.

March’s trip will be to the Casa Grande Neon Sign Park on March 18th. We will meet in the parking lot behind Wendy’s to carpool at 9:15am. Afterward we will be lunch at Bedillon’s restaurant in Casa Grande.

February’s trip was to the Gilbert Historical Museum on Feb 18th.

January’s trip will be to the Mesa Historical Society Museum on Jan 21st.

November’s trip was to the “Dwarf Car Museum” on Nov 19th. (Date was moved up due to the Thanksgiving Holiday.)

There was no trip in December. 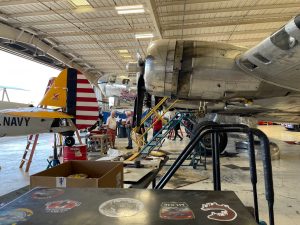 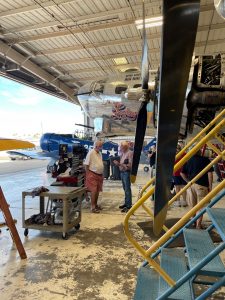 Our First Friday Field Trip for 2021: We had a great time at the Commemorative Air Force Military Aviation Museum in Mesa for our first member field trip of 2021. There were 19 members who attended and we were entertained as well as informed by our tour guide, Tom (retired Brigadier General) who had many first hand stories to share. 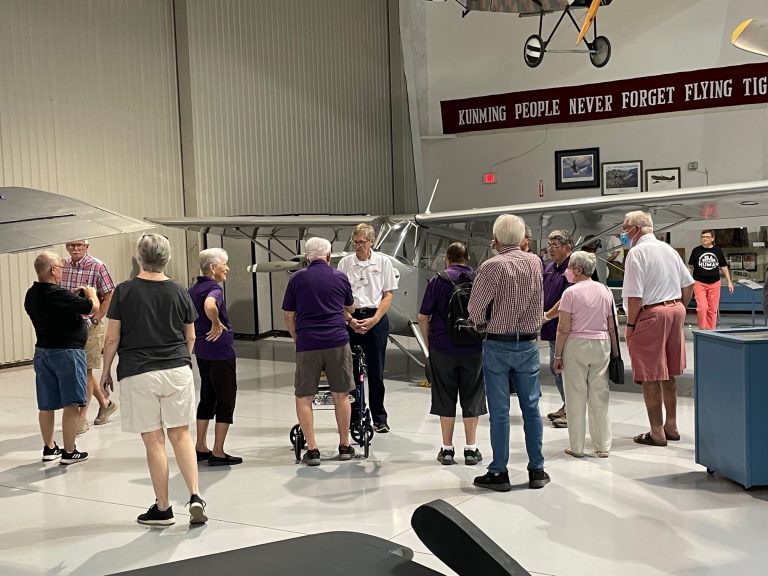 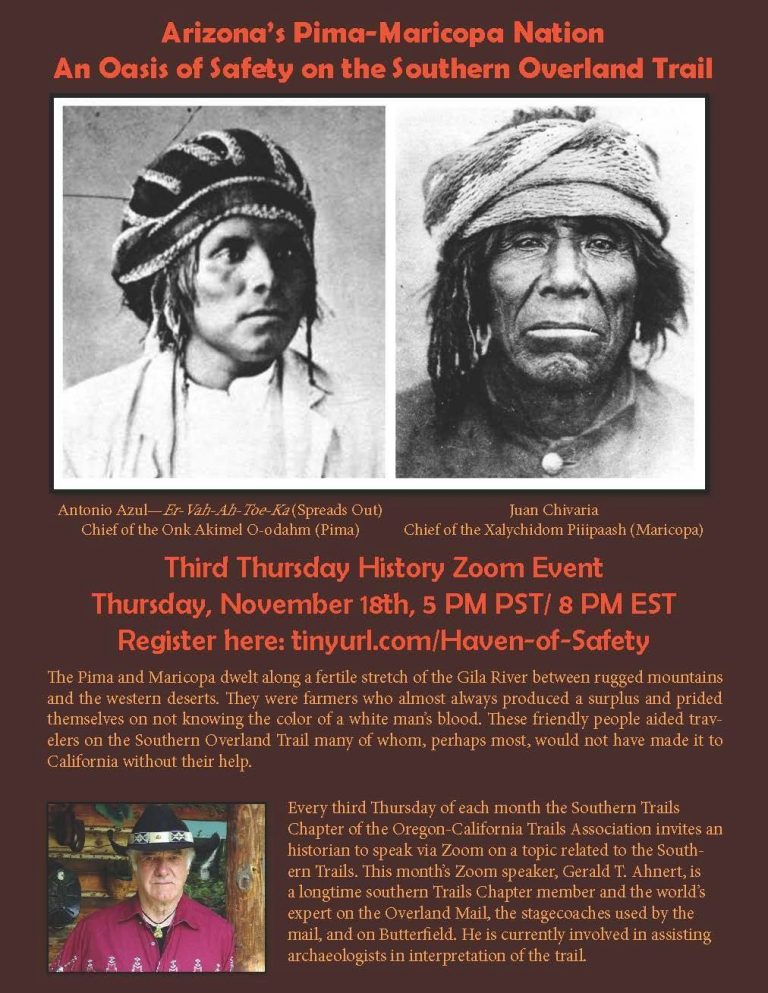 Special zoom meeting with Gerald T. Ahnert on “Arizona’s Pima-Maricopa Nation An Oasis of Safety on the Southern Overland Trail” 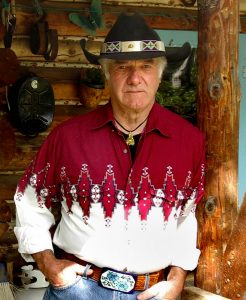 Thank you to all our past Guest Speakers

Oct 4th we had the “Hip Historian – Marshall Shore”

He, began his PowerPoint presentation with a look into his own mid-century Phoenix home with all its original charm. After a quick look at some Phoenix landmarks, he shared a classic black & white video of Oak Creek Canyon and Montezuma’s Castle and then led us into some ghost towns of Arizona, included in his presentation were; Jerome, Crown King, Cleater, Apacheland Ghost Town and Museum, the Lost Dutchman Mine, Two Guns, Castle Hot Springs Oatman and Ruby Arizona. Mr. Shore ended with news of a paranormal conference to be held in Vulture Mine, Az which still has an active mine. 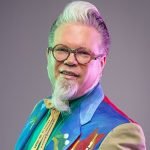 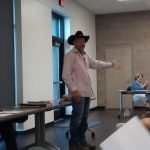 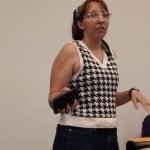 Our September guest speaker was Will Dunn, whose grandfather W.F. Dunn and Will’s father Sonny Dunn moved to Maricopa in 1954 where they farmed and became involved in the early days of Maricopa life.

Will Dunn provided his light-hearted look at the growth of Maricopa. After he got “comfortable” he shared a bit of his own story in Maricopa including being on the first city council and his business ventures. And then he turned it over to his daughter, 21 year old Katelyn Dunn, 5th generation of the Dunn family.

Katelyn shared memories and reflections of growing up in Maricopa from a kid’s perspective.

Our August guest speaker was Sue McNelly, Professional Genealogist; Sue opened with “I Seek Dead People” and then shared her personal background and the family genealogy research that led her to her life as a genealogist. Her mantra of “Fill in the —(dash)”is about filling in the blank between the birth date and the death date with tips to help find the needed records. The conversation concluded with a lively question and answer session. 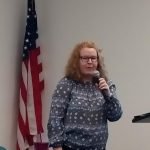 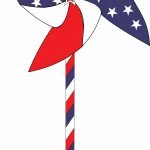 At July’s meeting our guest speaker was, Lucia Aviles Rodriguez who shared her experiences growing up in Maricopa and then raising her own family here. Family, Community, church and school traditions have always been the cornerstones of her life in Maricopa. Her daughter had Pat Brock for a teacher and her class is the one that made the model of the train station that MHS has now. The end of the school year was celebrated with Field Day activities and races. Eighth graders always had a bus trip to the Grand Canyon chaperoned by teachers and parents while high school seniors got to go to Disneyland. High school traditions started in 1957 and continued until the mid 1980s. Freshman initiation lasted a week and included a trip to the M mountain to paint the M. Homecoming parades and bonfires provided school spirit for the Rams Football team. In 1977 National Geographic Magazine published a picture of Maricopa High School seniors Maria Aviles (older sister of Lucia) and Norbert Peters in an article. Three generations of both the Aviles and Rodriguez families have all been MHS graduates.

Our guest Speaker for June was Fire Marshall Eddie Rodriguez:  Eddie was born and raised in Maricopa.  His adventures include the early beginning of the volunteer fire department and his interactions with many of Maricopa’s colorful characters and pioneers of a fledgling community. 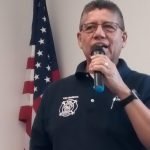 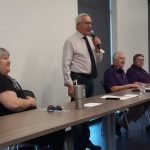 For May’s guest speaker we were treated to a historical conversation with Tony Smith, former Maricopa Mayor and Pinal County Supervisor and his wife, Vice Mayor Smith.  We enjoyed stories and interesting happenings that Tony has experienced in his many years in Maricopa.  Tony shared with our members many highlights of the spirit, humor and changing times of our young city. His wife added several highlights of recent changes and hints of upcoming improvements to the city.

For our first guest speaker in our new meeting site and to start off a new year of the Maricopa Historical Society we had our own Oliver Anderson share a “History Conversation” of Maricopa through the years. We were entertained and informed with a variety of stories and timeline of events in Maricopa’s history since Oliver arrived in 1949. 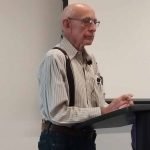